I finally caught up in the February Art-A-Day challenge to find only a few more days left! Playing catch up was difficult. The more behind I fell the more a little voice in the back of my mind told me to just abandon the rest of the challenge, especially since I had a whole list of “more important” things to do. That voice is a silver-tongued monster; the same monster that whispers about my work just not being up to snuff. I’ve taken up a crusade against this voice, so in continuing my battle I finally managed to complete the items on my to-do list that needed immediate attention, tell that little voice to go fly a kite,  and took two days to complete a week’s worth of pieces all in one. That week’s worth of work spans the end of Week Three and the beginning of Week Four, but two pieces made it into this week’s favourites round-up.

I’ll start off with a photograph I took before falling behind, entitled “Corded“, for Day Fifteen’s theme “Phone”. 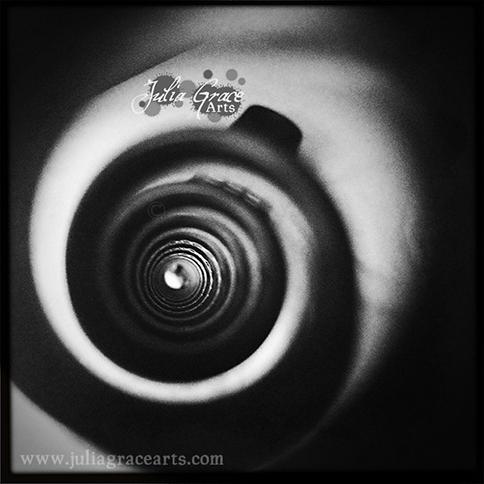 Since I use my iPhone for most of the photography in these challenges, and it had already appeared in Day Ten’s piece, I wanted to do something other than take a picture of it. I’d originally thought of a rotary phone, but don’t own one. There is, however, a corded phone here for the land line when the power goes out. I decided to take a photograph from an uncommon angle and since the cord itself is my favorite part of the phone I chose a view looking through the center of it. Playing with the cord brought back fond memories of twirling myself in the long, sagging, white cord of our kitchen phone as a child. I remember its weight and the sound it made slapping against the cabinets and the floor.

The next piece is a digital painting for Day Nineteen. 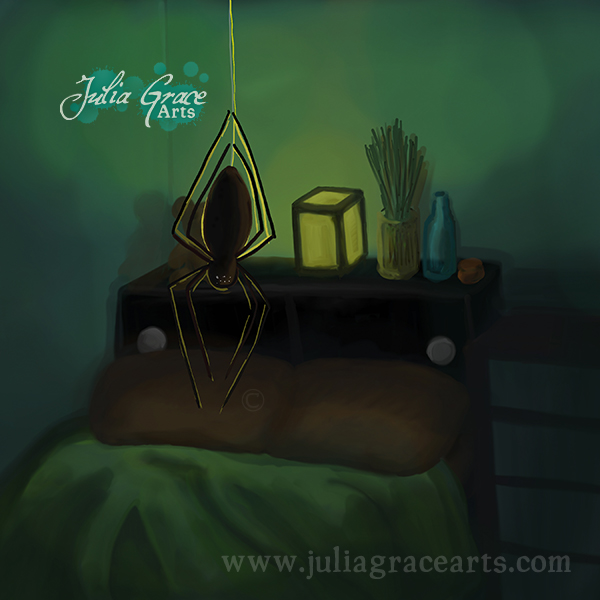 The original theme for this day was “Something You Hate To Do”, but I couldn’t think of anything I hate to do that would make a worthwhile art piece because, let’s face it, who really wants to look at a picture or painting of a cat box or hairball on the carpet. Ick! I shortened the theme to “Something You Hate” and one thing that I really hate is spiders in or near my bed! I really don’t mind spiders in general as long as they aren’t on my person, holding tarantulas aside, but there’ve been too many times I experienced them dropping or crawling on me while half asleep. The worst experience by far was when I was rudely awoken from sound slumber at 5am as one of the cats chased a baby tarantula sized fishing spider up the bed along the wall it’s against. Thankfully even in my half asleep state I managed to scramble out of the way as my “knight” proceeded to kill the “demon” on my pillow and leave its carcass as proof of his heroic deed. Ugh! I spent the rest of the night cocooned in a blanket in the exact center of the bed. That was the inspiration for “Nightmares On Silken Threads“, though it doesn’t depict that particular incident. I chose the title for its double meaning of silk sheets and spiders hanging from silk threads.

My top favorite for this week, which has tied for first place with “One Tough Bunny“, was the most fun to create as well. “The Ritual” involved black silk, wine, and a flashlight. 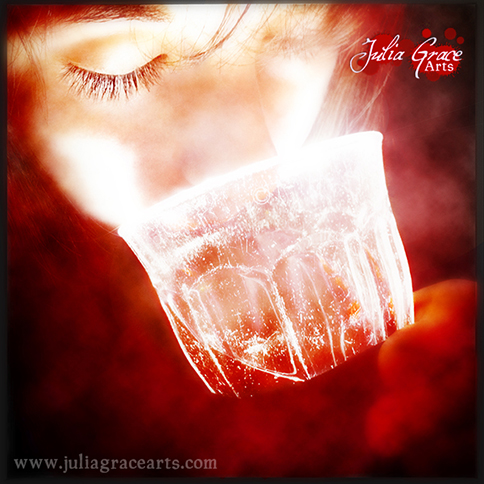 Myriad stories ran rampant through my neurons as I set up and photographed this image. I thought of vampires and elves, of darkness and light, of Carroll’s Alice and Neo’s red pills, until I was entirely distracted by trying to get the lighting and focus just so. Still, whenever I look at it, my mind returns to wander the many pathways of what might happen when the girl drinks from the glowing cup. Is she in danger or will it save her? Is she joining a family, a culture, or a cult? Is it poison, wine, dragon’s blood, or the red light of a dying star? I love the possibilities this image brings to mind and the inspiration it gives me for future stories. I would also love to hear what story it tells you! Please leave your thoughts in the comments.

That completes Week Three’s favourites. I’ll be posting the final week’s favourites in a few more days as well as posting about some really wonderful art supplies and the new business cards I designed. Stay tuned!