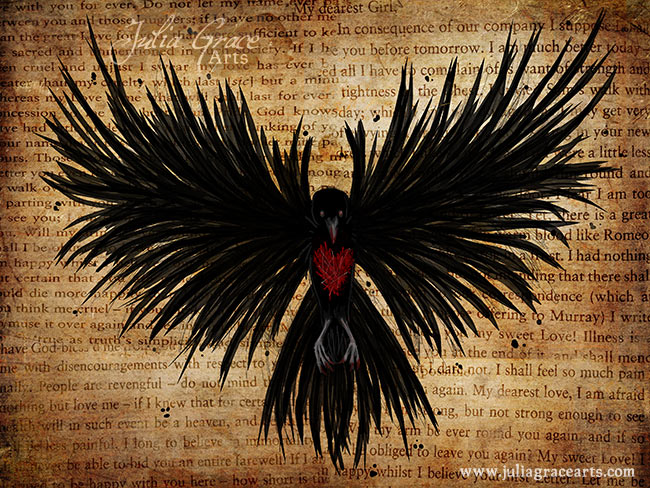 Have a raven… or he’ll have you’re heart!
(to view larger, go here)

I am not a fan of the commercialism of Valentines Day, and since it’s a Singles Awareness Day for me, it’s mostly just another day this year. However, I wanted to create something to share with somebody, but what? I decided I’d make a Valentines for all my readers, watchers, and followers, but I didn’t want to make something pink or cutesy or kitschy. In fact, I wanted to do the opposite, I wanted to create something darker, especially because love has its dark underbelly that the Hallmark cards never talk about.

I was pretty stumped until this guy flew into my head! One he was embedded on my neurons he was very cooperative since he managed to get through my hand and onto the digital page without any fuss and came out exactly as I had envisioned, which is a rare, but extremely pleasant occurrence!

His name is Poeykeats, which is both a play on the word Parakeet (but please don’t tell him that he might peck my eyes out!) and alludes to the content and meaning of the piece. I didn’t just want him to be any old corvid with a heart drawn on him, I wanted to combine him with my love of literature and writing as well as with some symbolism. So, he became a raven, with the associations to Edgar Allan Poe and with death, but he also represents love in all it’s aspects with his heart and bloody talons and beak and he’s painted on a “page” of love letters. I chose John Keats’ love letters to Fanny Brawne because they are both wonderful and sad and fit the connotations I wanted the piece to have since Keats was extremely ill and died without being able to marry the love that he composed such beautiful work for. When I finished painting him and saw the thumbnail of the image on my computer, I also noticed that the raven himself formed a heart shape. How appropriate! Of course I totally meant to do that….. subconsciously.

So, here he is, a valentines raven from me to you to bring you a message of love and appreciation because if you are reading this, I very much appreciate you! I hope that wherever you are and whoever you’re with, you’ll share some love, appreciation, and kindness with others and remember someone out there loves and appreciates you, even if you feel alone.

« Children Of The Moss & Other Prints The Goblin King »