The Genius At The End Of The Line

I have quite a bit of news to share, but I thought I would start with the conclusion of the Sky Whale saga. First, I’m extremely proud to announce that my sculpture was chosen as one of 20 finalists for February Tale art for the Calendar of Tales Project! It’s featured on the official website here (scroll down or click to February and he’s a thumbnail below the winner). I am beyond thrilled. The whole experience has been one of the most encouraging things to happen to me and led to a number of other very exciting experiences. 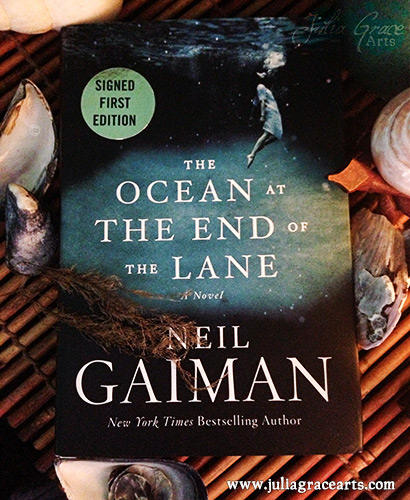 One of those experiences was attending a signing tour stop for Neil Gaiman’s new novel, The Ocean At The End Of The Lane. Ocean is a dark and enchanting story about childhood, helplessness, and old magic. I won’t write a full review since there’s a plethora of them out there (a few of my favorites here, here, and here), but I quite enjoyed reading it. It’s a quick, entertaining read, but also something you can really dive into and dwell on, discovering new meaning each time you read it.

The signing event was in Saratoga Springs, NY, a 5 hour drive one way, but as this is Neil’s last US signing tour I decided to make the trek. Traveling through New York was beautiful. I stared in wonder at layers of misty blue peaks as I passed through the mountains, great tree covered slopes on either side of the highway. I drove in morbid hail storms composed of periodical cicada swarms. The poor bugs do not fly very well across roads. They’d get sucked into the vacuum of traffic; their little bodies bouncing off cars and blowing across the pavement. I also had a heart pounding moment as a rather suicidal deer leapt across four lanes of highway passing in front of my car.

I arrived in Saratoga Springs to find a lovely town, full of old Victorian homes, a castle-like military museum, and much more I wish I could have explored. The hotel was incredibly nice and the staff welcoming and friendly. I even had amazing cabbies who provided me with descriptions and explanations of the town and splendid conversation about karma, following your dreams, and how your beliefs influence your art. 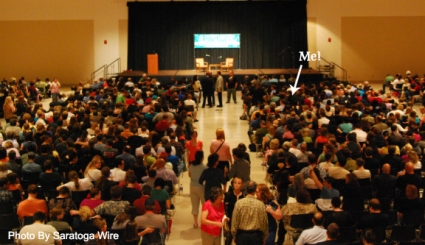 The event itself made for a fantastic evening spent in the company of 1,500 other Gaimanites. (On the left you can see about 1/2 to 2/3 of the room.) The crowd was incredibly diverse, but we laughed, clapped, and cheered as one. Perhaps we make up our own periodical swarm, emerging for Neil Gaiman events and bonding over our shared love before sinking back underground where we feed upon roots of stories and novels until the next gathering. However short a life a gathering may have, the friendships you have a chance to form last much longer. I bonded with a wonderful little group of people with whom I share a surprising amount of hobbies and interests outside Neil’s work. I’m already looking forward to visiting them. One of my awesome new friends, April, and the Saratoga Wire generously gave me the use of these photos. 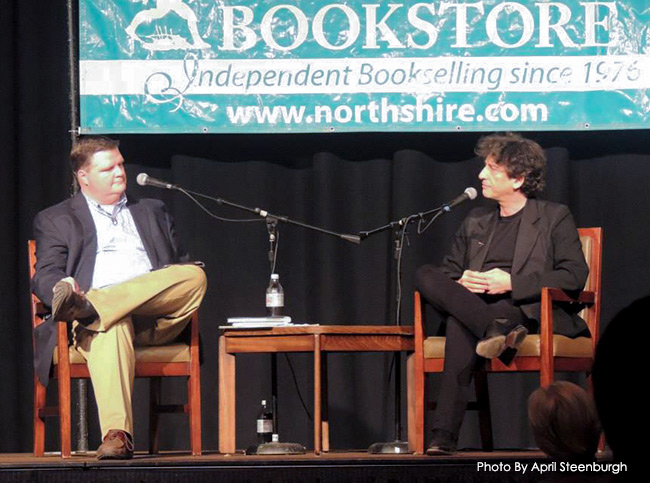 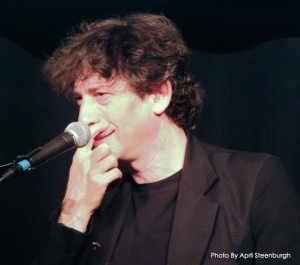 Neil was entertaining as always and I really enjoyed listening to the story of how he wrote Ocean and the excerpt he read from it. They recorded a radio program, including the story of the book’s creation, during the event as well. It’s absurdly fun to think about how I’m one of the 1,500 audiences voices in the recording. You can listen to it here if you’d like, it’s a great show. There was a Q&A session in which we learned that Neil can keep all the secrets in his hair and that is indeed where the metaphors come from, and we had the dubious pleasure of hearing him tell a dirty joke that nearly got him expelled from school as a child. On the left is his face upon being pleaded by the host and audience to tell it. Below is his face while telling it. It matches the voice he used perfectly. 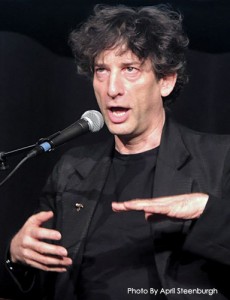 Neil also read us an excerpt from his upcoming children’s book, Fortunately The Milk, a hysterically whimsical story about the adventures a father has while attempting to bring home milk for his children’s breakfast. I am anxiously awaiting the release date. Here’s a clip of him reading from Milk at another event.

While listening to Neil speak is always a treat, I didn’t attend the event solely for that delightful experience; I wanted to thank him. Neil’s work and words mean so much to me, giving me endless inspiration for my art, encouraging me to follow my artistic dreams, and giving me the courage and motivation to do so (notably his Make Good Art speech). In thanks for all this, I decided to give him a print of a painting and make him a Sky Whale sculpture. 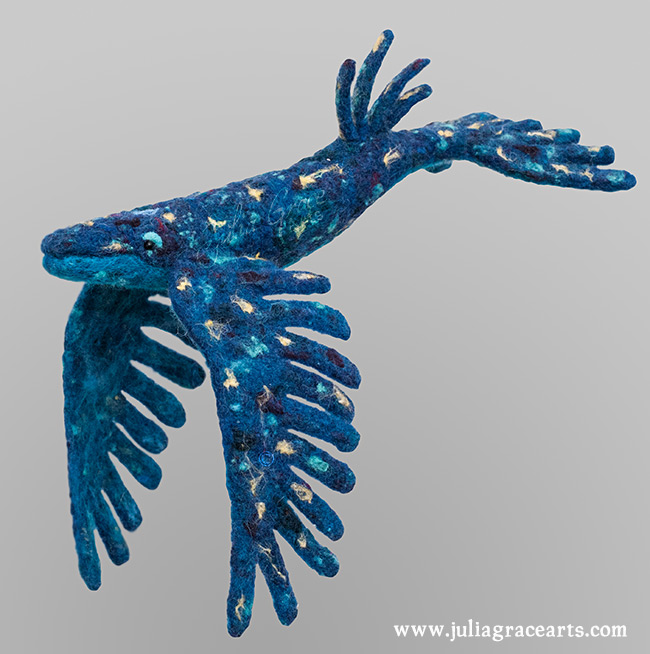 Making Neil’s Sky Whale was just as much fun as making the original, perhaps even more so since I didn’t have to stay up for 25 hours to finish it! I followed the same creation process for Van (as I’ve dubbed him, continuing with the Van Gogh theme) as I did for Vincent. I’m very happy with how he came out; his colors are more vibrant and the wings and tail are much more sturdy. I had a blast photographing the two whales as well. Here they are swimming together. 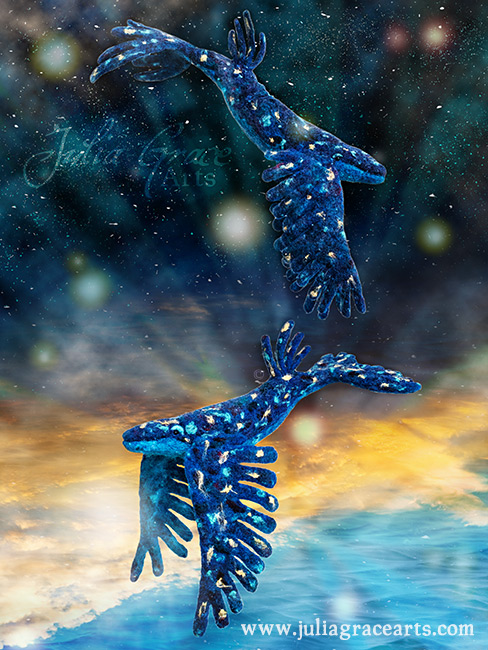 To protect Van in his travels I made a special storage box from a shoe box, iridescent wrapping paper, and a silver marker. I drew a Sky Whale on the top as well as quoted the line from the story. The sides say various things like “100% wool sculpture” and “Thank You!”. The box is lined with starry yellow tissue paper as well. 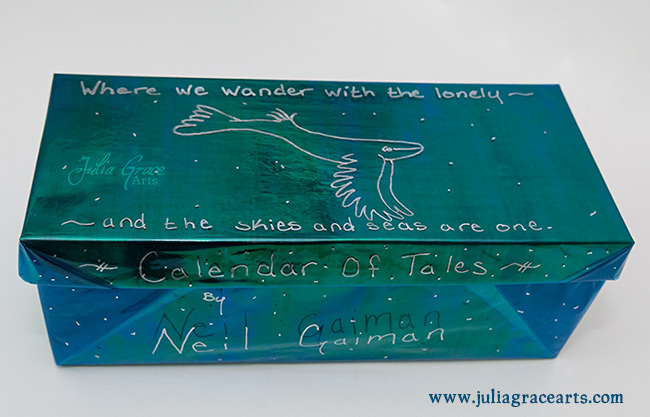 One really amazing thing happened while I was making the box. I found the Northern Lights! Amazing what a box and the reflections off of the wrapping paper can do. I think I will make another box, just so I can hold captive a little of the magic of the aurora borealis.

The painting I made is of Cabal and Lola, Neil’s white German shepherds. Cabal recently passed away. Neil wrote a heart breaking post about Cabal and having recently lost a beloved pet myself I wanted to commemorate Cabal for him, so I got out my watercolors and started to paint. I’ll have a separate post about the process, but here’s the final 5×7 piece. 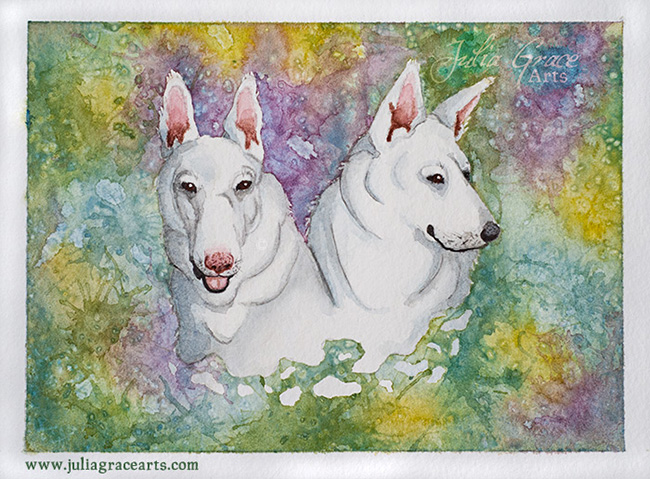 Here’s the print I presented to Neil. 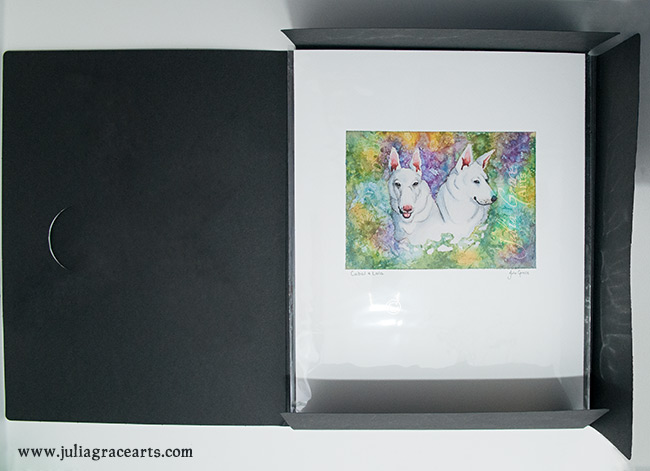 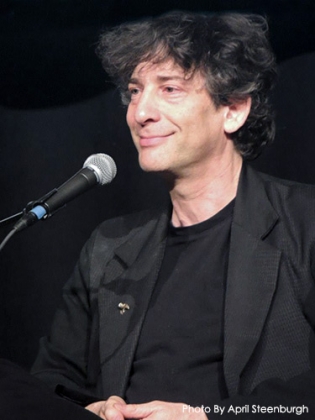 While I only had an incredibly brief moment with Neil (he did have to sign things for 1,500 people after all!) I don’t think I’ll ever forget it. When my work slid down the table he picked up the print, showed it to the managers and other people with him, and exclaimed “This is glorious!”. I’m not sure I’ve ever smiled quite that big before. Then I was in front of him telling him I was one of the Calendar Of Tales artists. He saw the Sky Whale and said “You did that one? I love that one!” I then handed it to him and said “It’s for you!”. His jaw dropped and he grabbed me over the table to give me a hug and kiss. My heart exploded into myriad happy bits and shards during that most amazing and awkward-over-a-table hug. I managed (hopefully coherently) to say thank you and there was a card explaining everything in the box. I then shook his hand and walked away with a full sparkling-happy-shards heart and delighted smile.

I later tweeted Neil saying thanks for the wonderful evening and I hope he enjoyed the gifts, he replied “So beautiful”. I learned from Cat Mihos, who was a huge help to me answering questions about presenting the gifts to Neil and helping it flow smoothly in line, that my work was safely on its way to its new home. I’m not sure the English language contains enough fantastical words to describe just how magical the whole thing felt.

The next day I was home and back to the everyday, but now my everyday is just a little brighter for having been a part of the Calendar Of Tales project and meeting Neil and I’m enthusiastically anticipating where all the inspiration I’ve gathered will take me next. Thank you again Neil, and thank you Cat for all your help!

I hope you’ve enjoyed what’s probably the longest blog post I’ve written so far! Have a wonderful night and I highly recommend a bed time story by Neil.
- Jewls

« Creation Of A Sky Whale Imagine That! »