Happy Febrrrrrrrruary all! It snowed here today. Big, feathery flakes tumbled down from soft-box skies, coating things in ephemeral, crystalline beauty and giving the day a peaceful, insulated feel. I spent much of it reading and procrastinating starting today’s art challenge. If you’ve been following me on Facebook or Twitter you already know about the challenge, but for those who don’t visit my social media pages (what are you waiting for!) let me explain. Late last year a fellow photographer from my graduating class at Hallmark Institute of Photography, Diana Garcia, posted a “30 Day Photo Challenge” on Facebook asking if anyone would like to join in. I agreed and had a lot of fun, (you can view the results here), this month she posted another challenge and I jumped right in. However, I decided to make it even more challenging by adding other art forms.

I’m posting each day’s piece on Facebook, (check the album out here and be sure to “Like” the page!), but I wanted to share my favorites from this week’s themes here. I’ll start with what may well end up being my favorite from the whole challenge; I think he’ll be pretty hard to top. 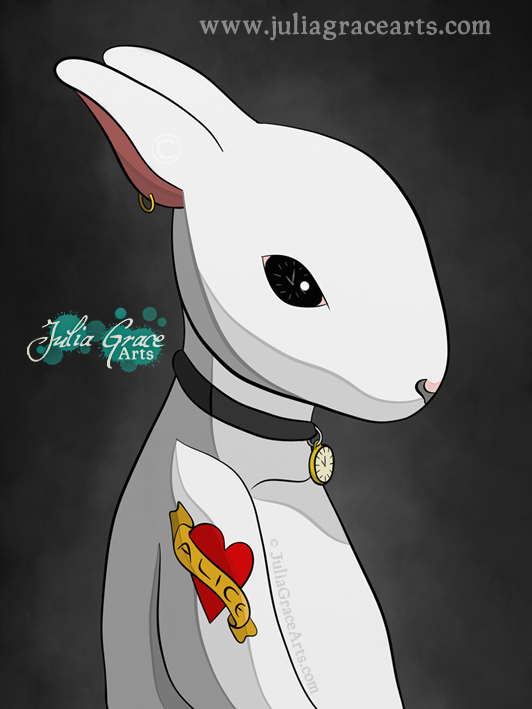 “One Tough Bunny” was Day Five’s piece for the theme “10am”. I often find myself taking themes and prompts very literally, so I’m try push myself to come up with ideas farther outside the box. 10am was also rather difficult in and of itself as a theme since how do you really represent 10am? I knew I didn’t want to simply take a picture of a clock, I’d done that for a related theme in the last challenge. Since I am usually up past 2am I’m often just waking up around 10am, so at first I started a piece involving dreams. That particular idea fell apart quickly, making me feel rather dejected, so I changed directions.

Despite not wanting to photograph a clock, I still wanted a clock represented somehow and when I really ponder times and clocks I invariably start thinking about Alice’s White Rabbit. I decided falling down a rabbit hole was exactly what I needed, so I ran after my own version of the leucistic lagomorph. I didn’t want to copy Disney’s, so I gave him a complete make-over, including attitude. It started off with having a clock in his eye, meandered from an anatomical rabbit body to having more of an anthropomorphic form, and then the tattoo appeared. I still felt like he was missing something, a pocket watch of course, so I gave him one on a choker, which led to the earring and tada! He felt complete. We’ll see if any future pieces can top him in my favorites, it will add one more aspect to the challenge

Next we have a photograph from Day Four’s theme “A Stranger”, entitled “Masquerade“. 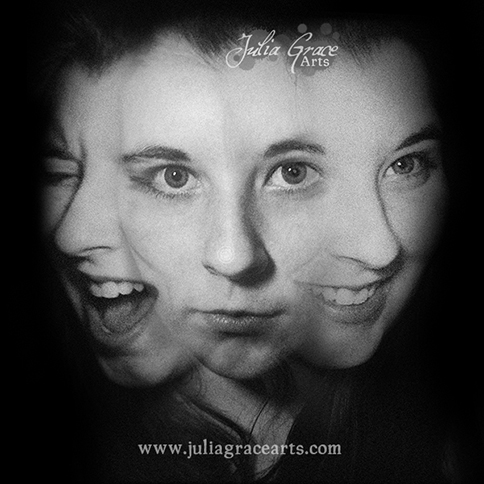 The multiple exposures showing hidden emotions concept is something I’ve been fooling around with for a while. I haven’t yet achieved exactly the image I have in mind, but this one is quite close. This is the first time I’ve done a “triple exposure”, previously I used a double exposure option in camera, but since I use myself as a model it’s been difficult to get things lined up correctly while guessing where to position myself. Taking three separate exposures and lining them up in post production allowed me to get everything just the way I wanted it and add a third face. I like the way this image turned out, but I’m sure I will continue playing with this idea. 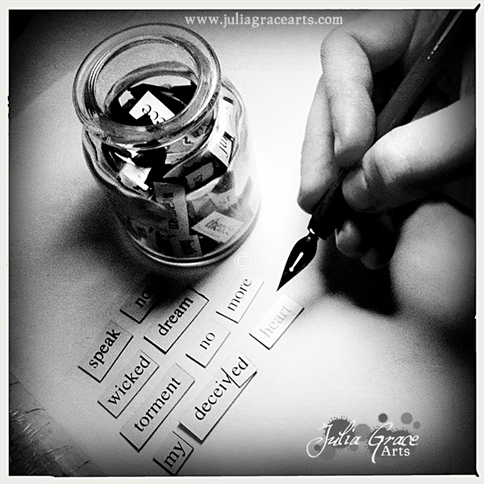 “Wordwell” was a really enjoyable image to create. I knew I would be unable to finish my other piece by midnight, so I scrambled to come up with something in the interim. In a fit of desperation to avoid taking a picture of random magnetic words or having to open a bottle of ink and try to write in something other than my usual inelegant scrawl I tossed a bunch of the magnetic words into an inkwell, put together the beginnings of a poem, added a “quill” in hand, and snapped the picture. Turns out a little bit of desperation can be a good thing for my creative process!

“Written Word” was a theme in the previous challenge. I’d considered using magnetic poetry in that image, but decided in favor of something I’d written, so I was glad for another opportunity to use them. I’m really glad I did because it allowed me to get a bit of poetry into the challenge as well.

The second piece for Day Two, “Dandelion Storm“, was an experiment for me. I decided to make a “drawing” entirely out of text. I hadn’t realized exactly how tedious this would be and so was unable to post it before midnight, but I completed it the next day. 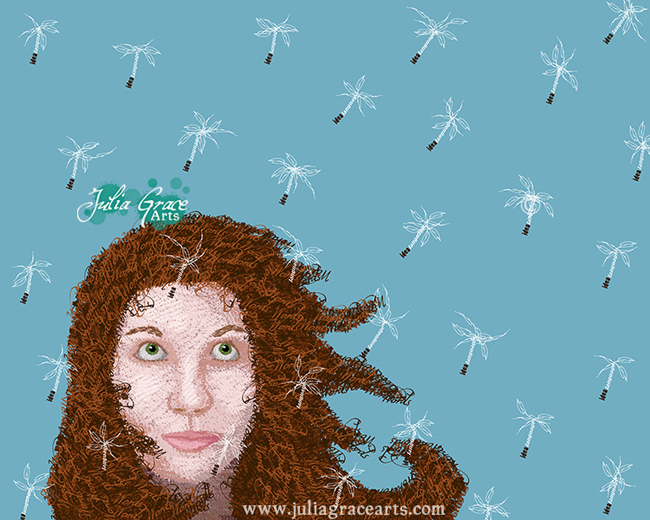 Despite the myriad repetition of duplicating text layers (greatly aided by zealous use of customized shortcut buttons on my wacom tablet) it was satisfying finding just the right fonts and words to use for each part. (You can find a list of the words I used here.) I’m happy with how it turned out, not having any prior experience with this particular art form, but I’d probably still be fiddling with it if I let my perfectionist side take charge!

Here is a detail shot, so you can get a better sense of the text 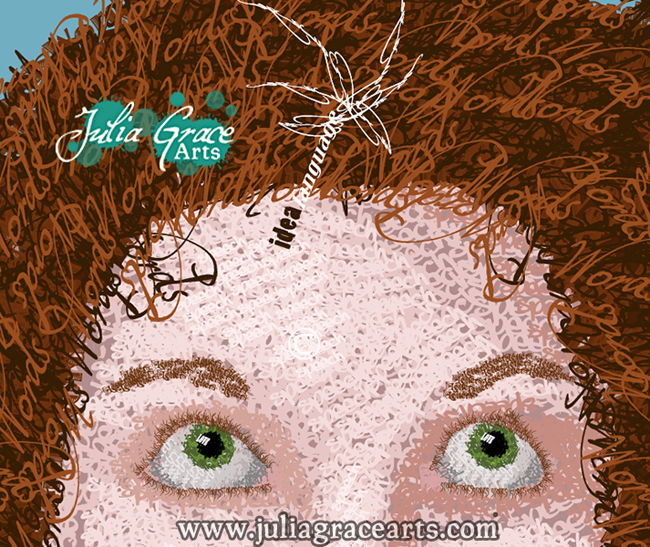 Overall, adding things such as painting, digital art, and anything else I enjoy into the challenge has definitely been harder than focusing solely on photography. It takes much longer to paint and draw than it does to photograph and since I am not as confident in my skills in other mediums it has been stretching my comfort zone, but it is motivating me to get my hands back into other art forms and practice those skills. As long as I can keep myself from falling into the “Pit of Perfections”, where I’ve spent way too much time berating myself for my art not being exactly perfect, I believe I’ll enjoy this challenge just as much as the previous one. I’ll be posting my favorites weekly, but make sure you tune into my Facebook Page or Twitter if you want to see a piece daily.

Awsome website! I am loving it!! Will be back later to read some more. I am bookmarking your feeds also