The February Art-A-Day Challenge is officially complete! It was quite the journey, but it was definitely a worthwhile one. I had so much fun creating each piece and trying many new styles, mediums, and techniques. That’s what I love most about these challenges; pushing myself a little farther out of my usual routine each time and finding out I won’t crash and burn in spectacular failure as my “inner critique” often tells me I will. Even when my pieces aren’t as successful as I’d like I’m learning to accept it. I’m learning I don’t have to be perfect and neither does my work and making pieces like that is part of growing as an artist. It may seem like a simple concept, something everybody should know, but when you struggle with crippling ideas such as “Your work is just not good enough.”, “It’s not as good as [insert artist/piece/etc. here].”, You haven’t been doing this since you were 5, so it’s too late, why bother?” floating around in your head, the realization that you don’t have to be perfect and your work will improve if you keep trying is quite the paradigm shift.

And on that bright note here are my final favourites, starting with “Envy” for Day Twenty-five’s theme “Green”. 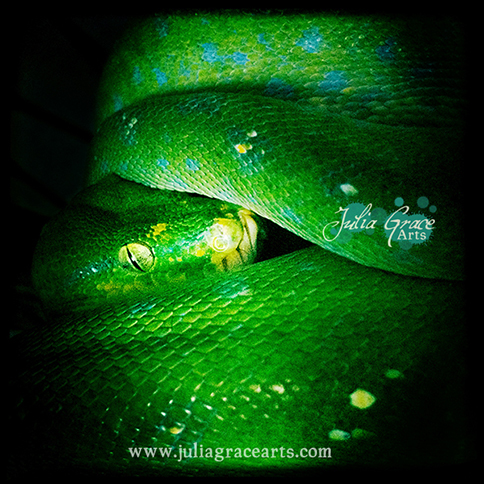 Nyari, my green tree python, is a favorite creature of mine, in an “admire the deadly beauty from afar” type way. She isn’t actually deadly, but a bite from her is not a pleasant thing since she has rather long teeth. Green tree pythons often have rather delicate dispositions and don’t take to stress well, so handling her often isn’t something I do. She does however have a very tall enclosure with branches and greenery and I love watching her crawl and coil. She’s a beautiful model, even if she does have a shy yet firey temperament!

I wanted my piece for this theme to have layers of meaning beyond the obvious color for those who wish to ponder such things. Since green is associated with envy, which can be likened to a monster and to venom destroying and poisoning you from within, I chose to photograph Nyari whom represents monsters, venom, and because snakes are representative of original sin in the Garden of Eden. Envy is one of the “Seven Deadly Sins”, so that ties in quite well.

My next favorite is “Blush“ 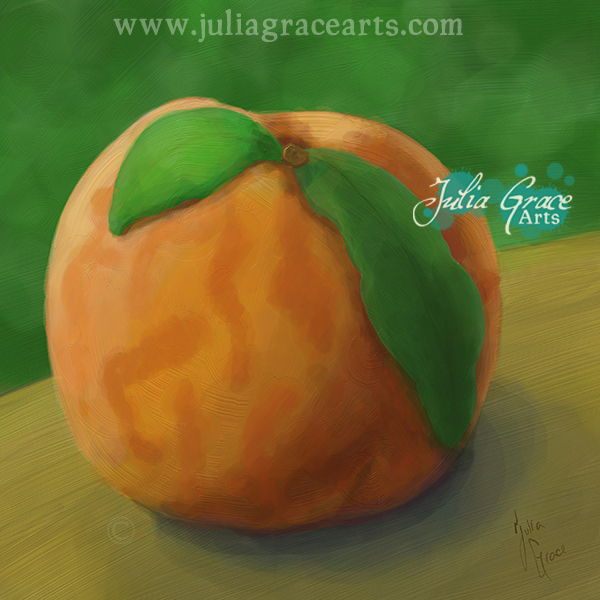 Since I haven’t eaten a peach recently I changed Day Twenty-Seven’s theme of “Something You Ate” to “Something You Could Eat”. This is one of the pieces I broke out of my regular routine with and was pleased that I did. I’ve never painted a still life before, though  I’ve drawn a fair few in my art classes and only a handful were in color, so this was something rather new for me all around. I also broke away from the stubborn idea ensconced in the deepest recesses of my psyke that everything I do has to be hyper-realistic. That single idea has caused me more agony over my work than any other. Moving away from attempts at hyper-realism has made me a much happier artist. That’s not to say there’s something wrong with hyper realism, though I once had an art teacher who said it wasn’t “real art” or “true talent”, it’s still something I hope to be able to achieve one day, but for now I am choosing to explore other options. It was very freeing to paint this peach representatively (but not hyper-realistic), accept it isn’t perfect, have a few things that I dislike about it, yet still enjoy the way it turned out.

The peach itself is based from a photograph of the single most largest peach I’ve ever come across. To give you at least some idea of it’s girth, here’s a few photographic portraits of it. 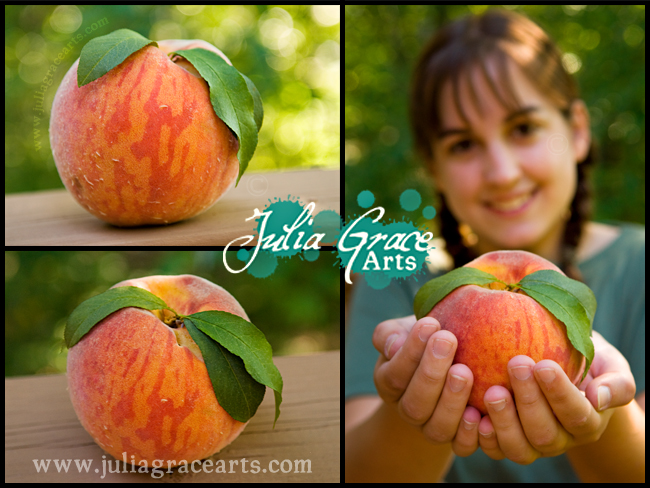 The final favorite of this challenge, which is in a three way tie for my absolute favorite with “One Tough Bunny” and “The Ritual“, is from Day Twenty-Six’s theme “Night”. 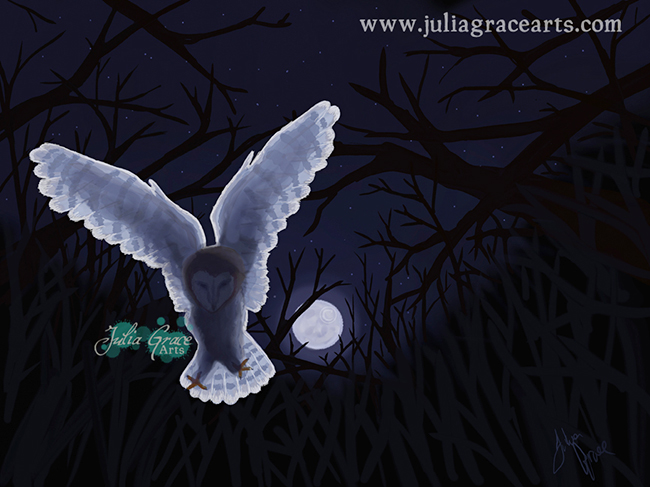 This feathered subject was a wonderful surprise. I originally started painting a moonrise above a dark forest when this guy swooped into my mind, grabbed my pen with his talons, and threw himself into the painting. I adore raptors, especially owls, so I was more than happy to have him and painting his luminescent feathers was my favorite part.

I chose the title “Phantom” since Barn Owls are often referred to as the “Ghost Owl”, “Demon Owl”, “Hobgoblin Owl”, and many other goulish names due to their spooky appearance, call, and probably the myriad occurrences of one suddenly appearing out of the night, white face gleaming, in close proximity to nervous humans. They’re beautiful creatures and one of my favorite species. I can readily imagine a little mouse, just out of the frame on the forest floor, unaware that death on silent wings is almost upon it.

I’m glad to be finished with this challenge, but I eagerly look forward to the next one I participate in.
Toodles!
- Joules